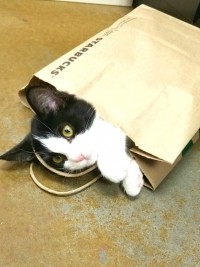 CEO
Ava was found on the side of the road covered in bumps, bruises, and fleas, and brought here to the clinic that she would eventually be named after. The team helped her feel better, and the rest is history—Ava quickly decided that she would like to develop her management skills by sticking around! She’s been a member of the Avalon Veterinary Hospital family ever since.

Here at the hospital, Ava spends her time checking up on patients and relaxing in her basket. She’s most productive when she’s able to get at least four hours of sleep during the work day—her proudest accomplishment is developing the proper loving and cuddling skills in the Avalon Veterinary Hospital staff so that they’re able to pass along those talents to other visiting pets.

When she has time between her beauty naps and her duties as CEO, Ava enjoys eating and would stuff herself during every meal if she could. She’s still trying to talk Avalon Veterinary Hospital’s care team into tripling her diet plan! 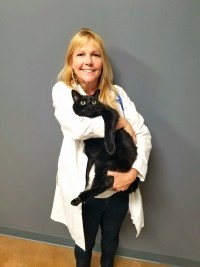 Owner / Veterinarian
Dr. Jennifer Morley has been smitten with pets ever since she can remember—she never even considered a career path other than veterinary medicine! Animal care is simply in her nature. Dr. Morley is proud to serve as an Associate Veterinarian here at Avalon Veterinary Hospital.

Dr. Morley is a native of Central Illinois and attended Illinois State University to earn her bachelor’s degree in biology and chemistry. Next, she headed to the University of Illinois’ College of Veterinary Medicine to earn her Doctorate and become a licensed veterinarian. Dr. Morley practiced in Illinois, Indiana, and Oregon before moving to Tulsa to continue her veterinary journey. She joined the Avalon Veterinary Hospital team in the spring of 2017, and brings with her special interests in feline medicine, behavior modification, geriatric care, and ophthalmology.

Dr. Morley and her husband of 25 years, Mark, have two boys named James and Jon. The family lives on a 20-acre farm that they share with a variety of wonderful pets. Dr. Morley has four dogs—Yadi the Doberman; a geriatric Labrador named Elvis; an elderly Yorkie mix named Daphne who was adopted back in Oregon; and a naughty pit bull mix who goes by Mabel—as well as two cats named Bob and Ramona. The family also lives with a fish named Garth, Violet the miniature pony, two Quarter horses called Diva and Lyric, and a gentle Appaloosa gelding named Spec.

Practice Manager
Holley was only 10 years old when she adopted her first puppy; their relationship lasted for 15 happy years, and Holley has held a deep love and respect for our canine companions ever since. For her, working in the field of veterinary medicine simply makes sense! Holley is one of the hospital’s Veterinary Technicians.

Holley first began working as a Kennel Technician while living in Harrison, Arkansas, and started training on-the-job to become a Veterinary Technician shortly afterward. She helped pets at that clinic for the next six years before moving on to another nearby hospital for a time. Next, Holley relocated to Tulsa, Oklahoma for her husband’s job and signed on at a corporate practice for the next four years. When she heard about an open position here at Avalon Veterinary Hospital from a friend, she jumped at her chance to better pets’ lives in a close-knit, family-centered setting—Holley joined the hospital family in June of 2017 and has been caring for the area’s pets and animal owners here ever since!

In her spare time, Holley enjoys relaxing with a good book and doting on her own pets at home. She and her family have three cats—C.C., Hobiecat, and the extra-grumpy Gertrude—as well as a dog named Poppins. 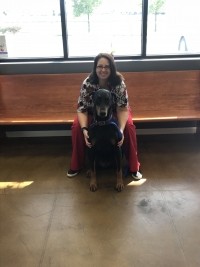 Veterinary Technician
Tobie has had a passion for fixing things ever since she can remember. When she finished her time in the armed forces and couldn’t work on military vehicles any longer, she decided to try fixing her other love: animals. Tobie hasn’t looked back since! She’s a Veterinary Technician here at Avalon Veterinary Hospital.

Tobie’s animal-care journey began at another local hospital, where she learned the ropes of the profession. Next, she transitioned to a busy emergency center before signing on at a surgical referral facility. In the fall of 2018, Tobie joined the team here at Avalon Veterinary Hospital, and she’s been tending to the needs of the area’s animal companions ever since.

She has a special passion for surgery work, and her favorite part of the job is learning new things on a daily basis.

Tobie’s interests away from work include photography, riding her motorcycle, listening to music, and enjoying the company of her own pets. She shares her life with a boxer and two loveable cats. 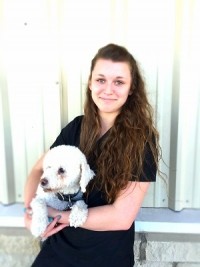 Veterinary Assistant
Worksheets from Rainee’s kindergarten days proclaim that she wanted to work with animals when she grew up—her dream hasn’t wavered since. Rainee has wanted to help pets ever since she was six years old! She’s proud to make a difference in her hometown community as a member of the Avalon Veterinary Hospital family.

Rainee was only 17 years old when she began an internship with a local animal hospital. Two months later, she was hired on as an employee! She’s worked in the veterinary field ever since. Rainee joined the Avalon Veterinary Hospital team in August of 2017, and greets clients and patients as a member of the front-desk staff.

Rainee has four dogs of her own at home: Cosmo, an elderly Bichon Frise; a Bichon Frise named Toby; Moose the French Mastiff, who will play fetch until he drops; and a retired military service German Shepherd named Chief who especially loves to howl along with police sirens. When she isn’t tending to pets’ needs here at the clinic or doting on her own canine companions, Rainee enjoys working out, cheering on the Oklahoma City Thunder, painting, camping, traveling, and spending time with her boyfriend.

Font Resize
Contrast
Accessibility by WAH
Call Us Text Us